What Is a Succession Plan?

A succession plan is a plan that focuses on identifying potential leaders and high performers, helping them develop so they can advance within their organization. Succession planning is vital because, as an organization grows, it’s more cost-effective to develop current employees for key positions rather than hire new people. Giving employees a clear path forward in their careers via a succession plan can also boost engagement and retention.

What Is the Purpose of a Succession Plan?

In a nutshell, a succession plan’s purpose is to promote employees from within the organization.  This helps fill the void previous leaders have left behind with qualified employees who already know your organization, which helps grow both your people and your company.

A succession plan also aims to reduce your business’s turnover rate. A valuable employee is less likely to leave if their company recognizes their leadership potential and allows them to move forward with their career.

Ensuring that the right people take the helm also reduces turnover by serving as a morale boost for the rest of your workforce. It’s a reassurance that the company will still be in good hands. Employees are often adept at spotting red flags within a company—they’ll be more compelled to leave if your company shows signs of leadership trouble.

In a way, developing succession plans is like buying insurance for your business in case of an emergency—except it also involves training employees to become leaders someday.

Benefits of a Succession Plan

At its core, an effective succession plan should help an organization choose and develop the right people for leadership positions. Doing this well could be a huge boon when you consider that 82 percent of the time, companies fail to choose people with the right skill sets to fill manager roles. Managers can make or break a team’s productivity, performance, engagement, and more, so choosing the right leader is vital for long-term success. Besides filling leadership positions with great people, organizations can also gain a variety of other benefits when they take the time to develop a formal, thoughtful succession plan, such as:

What Is Included in a Succession Plan?

If you are developing employees to move into a C-level position, the plan should detail how the company’s leadership or ownership will be transferred from the current leader to the new leader. This involves factors such as:

As higher-level staff move farther up the corporate ladder, you’ll need employees that are ready to take up positions left behind. Apart from establishing which positions these are, the succession plan needs to consider:

Leadership changes can sometimes lead to turnover. Your succession plan should include HR strategies for retaining or recruiting employees interested in taking up new roles. It also helps build an office culture that encourages its staff to develop their talents further and be more open to changes in the workplace.

How Do You Write a Succession Plan?

There are a few steps to follow when writing your succession plan.

Writing the plan starts by determining what kind of plan you want to make. The basic types of succession plans are death and exit successions.

What should the actual succession plan look like? Who will be promoted to key roles when the opportunity arises? The successor for many leaders or business owners can be a family member, business partner, or trusted employee. But it can also be someone buying the company.

Writing down only one successor can cause problems if that person doesn't want the position or also plans to leave the company, so consider listing a few other candidates with the help of hiring managers or leaders within the company.

3. Make a Checklist of Succession Procedures

This checklist is a guideline for you and the company to follow during the succession phase, such as: 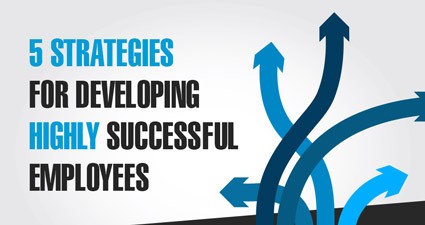 What causes employee to be successful? This webinar shares 5 strategies you can use on a daily basis to make your employees more successful. The most successful individuals, teams, and organizations set clear goals to reach success. Goals help us achieve more, faster, with less. In the end, the benefits of goal setting lead to one outcome: better employee performance.